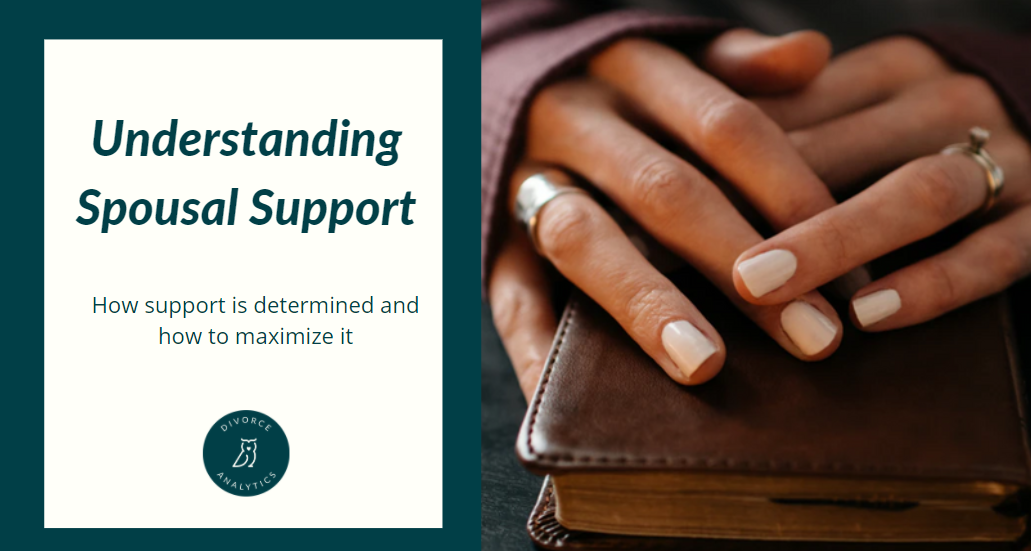 In North America, it’s the judge’s place to decide how the marital assets should be divided. By closely examining the income and assets of each spouse, the judge can determine if spousal support should be paid—and by whom. In some cases, the assets may generate sufficient income that either no spousal support is necessary or it can be reduced.

An important point to note about judgments and settlement agreements: unless they specifically state that the spousal support is non-modifiable, they can be modified due to material changes in either spouse’s circumstances.

What factors does the judge consider?

Judges consider many different aspects to determine first whether spousal support should be awarded, and if so, the amount of support and how long it should be paid. They may look at the amount calculated under the state’s guidelines. They will also look at need, ability to pay, length of marriage, standard of living, ages and health of both parties, number of minor children, educational level, and child support.

Let’s take a look at some of these factors.

The first question the judge will consider is, “Does the recipient have enough money to live on?” The spouse who asks for support is required to seek economic self-sufficiency. The judge will look at the individual’s ability to earn income and the marital and separate assets of the spouse seeking support to determine if he or she can use these assets as a source of support.

For example: Bob earns $200,000 per year. His wife Mary agreed not to work after college to stay at home and take care of their family. Mary has inherited $2 million from her parents. It is unlikely that she will be awarded spousal support, because she has $2 million and her share of the marital assets to use for her support.

The best approach to prove need is to prepare a detailed budget to establish the amount needed for spousal support.

The judge will decide how much the payor can afford to pay and still have enough to live in his or her accustomed standard of living. To determine one spouse’s ability to pay, the judge will add back discretionary savings (such as contributions to retirement plans and automatic withholding to savings accounts, bonds, and employer stock purchase programs).

For example: Bob earns $200,000 and invests $50,400 in discretionary savings. He invests $16,000 in his retirement plan, $20,000 in his employer’s stock purchase program, $2,400 in bonds, and $12,000 in a money-market account. When the judge calculates Bob’s ability to pay spousal support, they will include the $50,400, which Bob has withheld from his paycheck for discretionary savings, as income available to pay spousal support.

The payor spouse must act in good faith. If Bob were to quit his job, for example, so he would not have to pay spousal support, then the judge would generally consider the payor’s income-producing capacity. There is a Colorado case on record where the husband had a very high income and quit his job to grow mushrooms. The judge ruled that he could grow mushrooms, but that he would have to figure out a way to pay the spousal support that was awarded to his ex-wife.

The judge will also consider the couple’s standard of living during the marriage.

Age and Health of Both Spouses

Another consideration is the age and health of both spouses. Is either disabled or retired? If so, are they receiving a permanent income stream? If one spouse is 50 or older, and has never worked, he or she will have a difficult time finding employment. Spousal support will have to be awarded.

Spousal support may be awarded for a specified time period, or it may continue until it is modified or terminated. Some judges have a rule of thumb that they will award spousal support for half the number of years of the marriage.

Spousal support generally ends upon the death of either spouse, or upon the remarriage of the recipient. Spousal support will continue until it is modified, unless the decree states that it is non-modifiable.

During the separation period, any payments to the other spouse are generally not considered spousal-support. However, if a temporary order was issued for spousal support, and the order does not state that payments will not be taxed as spousal support, then the spousal support payments are deductible by the payor and included in the income of the recipient.

What Is “No-Fault Divorce?” Can It Affect Spousal Support?

Keep in mind that judges have a lot of discretion in awarding spousal support. They may or may not consider the fault or conduct of one spouse when they decide if spousal support should be awarded.

Please note: This is general knowledge and is not tax/ legal/ or financial advice. Work with your professional team to find out what is best for you.