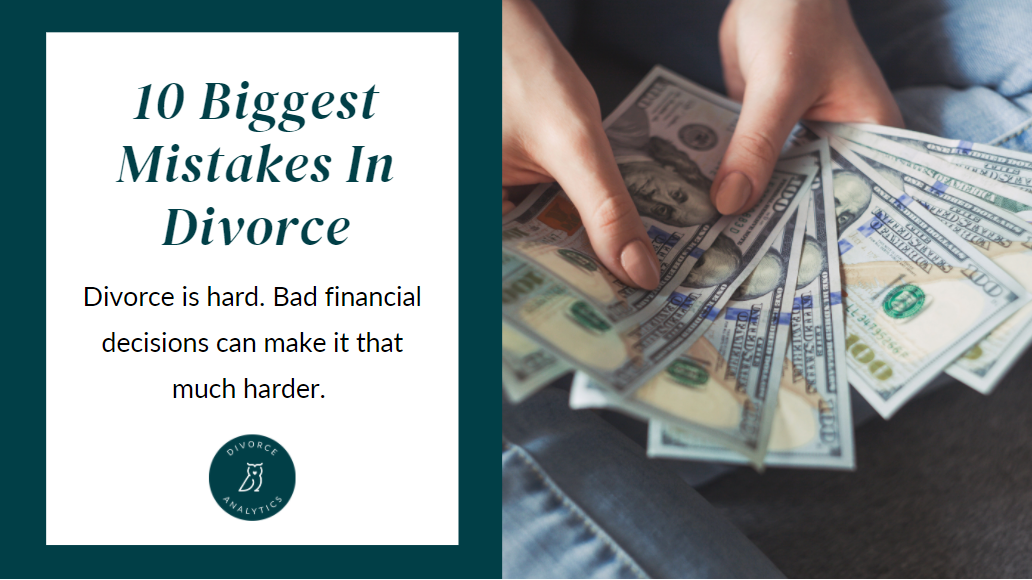 The Top 10 Mistakes in Divorce

CDFA® professionals from across the USA share some of the worst financial mistakes they’ve seen in their practices.

1. Terminating Spousal Support when a Child Reaches the Age of Majority

With the assistance of their lawyers, a divorcing couple crafted a Property Settlement Agreement that included both an agreed-upon division of property and a ten-year, defined-duration spousal support award for the wife. According to the agreement, spousal support was set to terminate in the same month the couple’s youngest child graduated from high school and turned 18, the local age of majority. IRC section 71 (C) (2) sets forth two child-related contingency situations in which spousal support will be re-characterized as child support:

In this case, had support payments ceased as scheduled, the payments would have been presumed to be associated with a child-related contingency and the IRS could have re-characterized spousal support payments as child support for the entire ten-year period. It would have cost the husband approximately $1,000,000 in additional taxes and very likely resulted in a malpractice suit for the attorney.

For the preliminary hearings, many state courts appoint special masters to set the groundwork for the eventual settlement. If they’re using inaccurate, misleading, or incomplete information derived from hastily prepared financial affidavits, they will most likely set a base line for settlement that will need to be substantially changed later. It is more difficult to completely restructure the settlement after their findings than to work within the scope of their plan. Although the financial affidavits will likely undergo several permutations, it is best to deal with the more obvious inaccuracies sooner rather than later. Such inaccuracies can include expenses that both parties claim or that may be exaggerated, income not reported, or deductions taken that should not be allowed. Time spent early in the process will usually mean great time-savings later on.

3. Forgetting about the Spousal Survival Benefit

I have seen cases where both husband and wife were retired and receiving pensions pre-divorce and wanted to keep it that way post-divorce. No big deal, right? No QDROs needed. That might be true, but did anyone think about the spousal survivor benefit? Can the election be undone? Certainly the husband and wife may want to stop paying the premium on that election. And if either took a joint and survivor option at in retirement, can they now “pop-up” to a single life annuity option post-divorce? Both attorneys and clients sometimes overlook these considerations.

Typically, when a family law attorney receives a stamped Judgment of Dissolution, their job is done. Clients also think they’re done—but there are many issues that could be avoided down the road if lawyers followed-up with clients to ensure they complete certain tasks to adequately wrap up their divorce. As a family law attorney, here are some of the most common issues I’ve seen:

Most lawyers ignore the tax status of an account when working toward an equitable division of property. Many think only about getting the columns to add up for the husband and wife: they don’t go a step further to determine how those assets will be affected by taxes if the spouse needs to sell the assets to survive. You need to understand the client’s future cash needs and determine which assets are best for him or her before finalizing property division.

I had a client whose husband had always handled the couple’s finances. I asked her to send me everything she could find regarding their assets; buried deep in the 80 faxed pages was her husband’s pension statement. His pension had two parts: a monthly income stream and a supplemental benefit that had a present value of $30,000. The $30,000 was included in the husband’s disclosure document, but he made no mention of the monthly pension income. I valued that income at around $390,000 and included it in the asset division report to my client and her attorney. However, when I reviewed the settlement agreement her attorney had drafted, the pension was omitted—a $390,000 mistake.

I have seen the dependency exemption for the children assigned to a wage earner whose AGI is so high that they cannot use the Child Tax Credit, American Opportunity Credit, the Adjustment for Student Loan Interest, or even the $3,700 deduction amount due to AMT considerations. Meanwhile, the other spouse could have taken advantage of the deductions/credits—and even could have gotten some of the refundable parts without a tax liability. At $80,000 AGI for singles and heads of households the American Opportunity Tax Credit begins to diminish and at $90,000 it goes away completely. If an individual is consistently in AMT territory the dependency exemption does not help them—these are disallowed under the AMTI calculation. The Child Tax Credit reduces at $70,000 and is completely gone at $95,000 for single and head of household. Therefore, lawyers should be aware of the tax implications when devising optimal divorce agreements. The dependency exemption for the children should not be assigned to an ex-spouse who cannot benefit from it.

8. Failing to Advise Clients to Refinance the Mortgage before the Divorce is Final

Let’s say that John and Jane have agreed that John will keep the family home post-divorce, giving Jane other assets to make up for her share of the current equity. You can do quitclaims to change the titling of the home, but unless John refinances the original joint mortgage, Jane is still financially responsible for the mortgage. If John stops making mortgage payments, it will affect Jane’s credit report as though she had missed the payments herself. The only way to ensure this doesn’t happen is for John to refinance that mortgage before the divorce is final.

9. The Perils of Jointly-Owned Business

I had a case in which a married couple, with no succession plan and no buy-sell agreement, jointly owned a business. Post-divorce, they agreed to continue to co-own the business. Unfortunately, after the divorce, the wife died and the husband became owner of everything. With the value of the business well in excess of $30 million, estate taxes were triggered with no way to pay them. With an accurate value on the business, it might have been possible to find a buyer before a triggering event occurred, or to have set up insurance to fund a buy-sell agreement.

10. Failing to Get the Insurance before Signing the Settlement

The insured should go through the underwriting process prior to signing the settlement agreement. If coverage will not be available due to health issues, or if the premiums are prohibitively expensive, other provisions should be included in the settlement to protect against pre-mature death, such as the creation of trusts or other estate-planning tools.

Please note: This is general knowledge and is not tax/ legal/ or financial advice. Work with your professional team to find out what is best for you.